The requested URL / files was not found on this server.

Additionally, a 404 Not Found error was encountered while trying to use an ErrorDocument to handle echotwvx the request.

Get the North American BLU-RAY at: Amazon, Walmart, Target and more. Signed BluRays at Dark Delicacies.

ECHOES OF FEAR has screened in over 20 festivals worldwide and won 7 Best Horror Feature awards. Distribution rights have sold to over 30 territories including Turkey where it was theatrically released  on 104 screens.

“If you’re looking for a good example of a low budget horror film that achieves worldwide distribution then look no further than ECHOES OF FEAR” said Jinga’s CEO Julian Richards. “The directors know how to build suspense, there are plenty of jump-scares and a great twist ending“.

ECHOES OF FEAR
Evil Hides Inside
A supernatural horror film by Brian and Laurence Avenet-Bradley.

Synopsis:
After inheriting her grandfather’s house, Alysa must confront the mystery of his sudden death and the evil that hides inside.

“Genuinely scream-worthy scares that will keep you up at night” — Matt Konopka of KillerHorrorCritic.com

“ECHOES OF FEAR delivers on all levels and whisks you along with its brisk pacing, terrific camerawork and a relentless musical score…there’s plenty of incident here to keep even the most jaded horror fan entertained.”
10 out of 10 –Sean Cockwell, My Bloody Reviews

“Echoes of Fear” is one of the best independent horror movies of this year. The Avenet-Bradley marriage plays with common horror tropes to create a dense atmosphere and some of the best jump scares I can remember…  This movie offers much more than what the viewer can expect and is the kind of movie that can push careers towards new heights.”
8 out of 10. –Dante Yurei, 10thCircle

“It takes a lot to scare me and this film did.” — Doc Rotten, Gruesome Magazine

“The new supernatural horror by husband and wife team Avenet-Bradley with Trista Robinson (The Human Race) in the leading role delivers the goods with a perfect feeling for creepy atmosphere and masterful pacing, with plenty of twists and turns that will surprise even the most seasoned genre fans. The film has already received numerous awards, among others at Shriekfest and Women in Horror Film Festival.” –Grossman Fantastic Film Festival

“Some of the best- and most honest- jump scares going…the multiple-fest-award-winning Echoes of Fear, is a consistently absorbing horror/mystery
punctuated by genuine jolts.” –Michael Gingold, Rue Morgue Magazine (print)

“Many fright-fare fans are tired of reboots and sequels, and Echoes of Fear is the type of original project for which many of those folks clamor. It gets high recommendations from me, and has secured a spot on my list of top 10 favorite horror films of this year.”
4 1/2 out of 5 –Joseph, THE SCARIEST THINGS

“I was absolutely blown away by Echoes of Fear, this is the kind of film true horror fanatics live for! The main thing I loved about this film is that it constantly keeps you on your toes. What seems like a setup for your standard fair house haunting/ghost story quickly unfolds into something so much broader. This is an intricately woven tale full of mystery, intrigue, and gripping suspense. There’s a lot of clever red herrings and misdirection thrown at you to keep you guessing, an elaborate labyrinth of twists and turns that keeps you absolutely enthralled from start to finish.” — Matthew Solomon, PopHorror

“On his latest film, Echoes Of Fear, he’s added his wife, cinematographer Laurence Avenet-Bradley, as a co-writer. The result is the film that should put them both on the map.”
****4 out of 5 **** –Jim Morazzini, Voices from the Balcony

“The haunted house itself is a central character to the narrative. The cinematography by Laurence Avenet-Bradley captures the facade of suburbia as the mystery takes dark turns. The camerawork builds the claustrophobic tension within every cramped room and dirty crawlspace… A suspenseful, Spine-Tingler!” –Jorge Solis, Villain Media

“It has probably one of the best executed, and actually crucial to the story jump scares, I think I’ve ever seen.” — Paul Cardullo, Gruesome Magazine

“Echoes of Fear is a solid tale of haunted madness. The effective jump scares are plotted out in such a way that they pull off their intentions and then some. You honestly don’t see a lot of the spooks and shrieks coming, which is damn good thing in this day and age of horror films… do NOT go see this spellbinding tale of the supernatural without a friend. Consider yourself warned.” –Loron Hays, Reel Reviews

“Echoes of Fear is equally an elegant throwback to horror films like The Innocents, and a modern look at the fine line between the natural world and the supernatural. And it has perfectly timed moments of suspense and SCARES. I say scares with a smile. You see the audiences at horror film festivals are jaded veterans so there aren’t many occasions when an audience jumps at a scare sequence.  There are at least two moments in Echoes of Fear where everyone jumped and popcorn flew and then everyone laughed in joy.  That’s like a standing ovation at a horror film festival.” — S.A. Bradley, Podcaster/Writer/Speaker, Hellbent for Horror

“Dread has become the pervasive tone in a lot of modern horror, there’s very few films these days that really set out to scare you, and the ones that do tend to have that been-there, done-that feeling. I can honestly, legitimately say this film has some of the best, most effective jump scares I have seen in a long, long time. When the first really big one hit, a girl seated in the front row ahead of me jumped about 5 feet out of her chair. It gave me a good jolt too, but I was so busy smugly patting myself on the back, when the next one hit that I wasn’t expecting at all, it was my turn to defy gravity. These are some legit scares ladies and gents. They’re incredibly effective, and extremely well-timed and placed, you don’t see them coming. And while jump scares tend to feel a bit gimmicky in some modern horror flicks, Echoes of Fear opts for quality over quantity, never overusing or abusing them. The execution is simply brilliant to behold, truly masterful stuff here.” — Matthew Solomon, PopHorror

“The filmmaker’s love of the horror genre is apparent, as is their skill while working within it. Viewers will find themselves alternatingly screaming, shouting, and shifting in their seats most uncomfortably. This is a film worth seeking out that will not disappoint.”
****4 out of 5 Bloody Eyeballs**** –Mark Gonzales, Killer Horror Critic

“This movie is so eerie that I wish I hadn’t watched it alone at night! The jump scares are effective, the score and visuals cultivate an unsettling atmosphere, and it is a true horror thriller with unexpected twists and turns…” ––Horror Buzz.com

“Trista Robinson gives my favorite performance from a female lead at Buffalo Dreams Fantastic Film Festival.”
****4 out of 5 Headless Critics**** –HeadlessCritic, WITHOUT YOUR HEAD

“BAM! I jumped out of my seat a few times in some truly short’s sh—ing moments… Co-writers/directors Brian and Laurence Avenet-Bradley crafted a groovy supernatural horror story that delivers the scares and keeps the audience guessing as to what is really going on.” –From the Basement

“This is not a ‘fun’ horror movie, but instead a troubling, realistic fight to stay alive… a charnel house of terror bathed in a genuinely icky sense of plausibility.”
****3 ½ out of 5**** –David Duprey, That Moment In

“Echoes of Fear has developed its own perfectly-timed moments of horror… By the halfway mark, I was couped up in the corner of my couch while holding a pillow for safety… The best scares in a  long time!”
****4 out of 5*** –Karina “ScreamQueen” Adelgaard, Heaven of Horror

“We get to see this ghost that they designed, and it’s such a cool looking character in the story…  And they use all practical effects. And the best part of the whole thing is that Laurence, who they call Lo, trained little mice for this movie, so they could be our little mice guides to help (laughs) our lead defeat this ghost, if it’s possible. And it’s just such a great, a great story. (Laughs) I love a story with a little sweet animal mascot in it AND can still be a really scary horror film. You wouldn’t think those two things would go together, but it does.” — Vanessa Thompson, podcast, Gruesome Magazine

Director Brian Avenet-Bradley co-wrote this effective chiller with his wife, cinematographer Laurence Avenet-Bradley, and the result is one that is sure to have audiences breathlessly awaiting their next cinematic collaboration. -—Staci Layne Wilson, Killer Queens 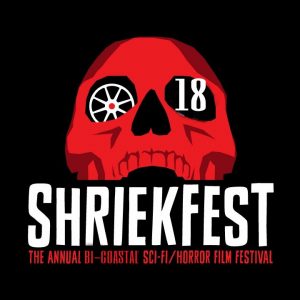 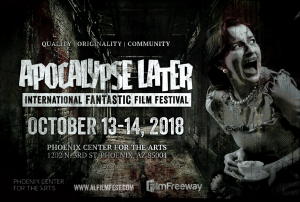 ANOTHER HOLE IN THE HEAD FILM FESTIVAL